No alarm clock was needed this morning. A combination of throbbing legs, adrenaline coursing through my veins and nagging thoughts about riders overtaking me, meant I was wide away at 12:50am. I’d got two hours sleep but now it was time to go. The equivalent of the Coast to Coast ride in the UAE remained. My head had been completely recalibrated in terms of what was a long ride, this seemed like nothing this morning.

The night porter gave me a very strange look as I dropped my key with him and wheeled my bike out of the door. He must have wondered why I’d checked into a hotel for just 2 hours of sleep.

My knees were now beyond painful and the saddle sore had burst as I put on my shorts. Pedalling down the road I gingerly lowered myself into the saddle and prepared for the last 8 hours of riding. The first half an hour involved winding my way through the backstreets of Sur, making my way towards the motorway to Muscat. It was eerily quiet.

The long flat roads of yesterday were gone, today rolling hills and sharp climbs were on the menu. As I settled into the first long climb out of Sur I checked the tracker to see how things had changed overnight. Not much was the answer. Rodney, Josh, Paul, Jason and Juliana were way ahead by some 3-5 hours. Raffique was showing as 30km behind me but the time stamp of that position was at 11pm so 3 hours ago. The unknown was Carl, his tracker still not working.

The street lamps ticked by in a hypnotic rhythm. My world became 10 minutes of seated riding, lift out of the saddle, 3 minutes of standing, back on the saddle, find some comfort, 10 minutes again. Repeat. I’d set off from Sur with just two oat bars and two bottles of water. So far every service station was closed and I was getting a little nervous.

Once I again I felt this was the essence of this kind of racing. Alone in the dark at 3am, the gentle noise of the tyres against the road. Not really thinking about anything but in a heightened state of mindfulness. The pain didn’t seem to matter, just the turning of the pedals.

My phone pings, bringing me round from my trance, it was Carl texting the group with his location, nice of him given that his tracker wasn’t working. Damn! He was 4km ahead of me. How did that happen? The race suddenly reappeared in my consciousness. The thing is, with 150km still to go you can’t just put the power down to catch up. It would have to be a long slow patient game, but this was for 6th place.

Then, 20km later, looming out of the darkness was a bike and a body on the side of the road. It was Carl, fast asleep,bike propped up, him lying on top of the concrete barrier, arms crossed over. Yes, in my head I danced a little jig. 6th place! But the mind doesn’t always work so well when this tired. As I freewheeled past Carl the noise brought him sharply to consciousness. Our eyes crossed as I sped down the road, my last sight of him was him leaping off the concrete and getting back on his bike.

Not time to panic and put the hammer down. Still 140km to go. Take it easy. My legs were tiring and still no sign of food. It didn’t take long for Carl to catch up with me so we rode side by side, both getting anxious for food.

At times Carl would pull away, then I would claw it back. A service station appeared, open, but on the other side of the road. Neither of us wanted to stop and cross over the other side and waste precious minutes. Dawn came, grey. Finally we came to a cafe that was open. A truce was called and we both pulled in for much needed food. I’d been riding for 135km and nearly 5 hours on those 2 oat bars and 2 bottles of water. I was hungry and dehydrated. Honey and cheese pancakes were devoured in a flash. It was then we noticed another bike at the cafe. It was Jason’s. Where was he? He appeared is if from out of nowhere. His face looked hollow, eyes a little blank. 5 punctures and pushing hard for 48 hours had taken it’s toll. Leaving a tube behind we rolled out. 70km remained and now it was a sprint finish for 5th place. We had both done far better than we had ever imagined but both knew we would be fighting for that 5th spot, and this is a race!

However I did have a plan. What I really loved about this race was how it could be tackled in a number of different ways. Some just rode the recommended route as fast as they could, others, myself included, studied the map in detail and had found a number of ways of cutting out a few km here and there.

It was pretty clear that Carl and I were both heading straight down the motorway into Muscat rather than the rather more hilly recommended route. My studying of the route had shown a way of cutting a corner by diving off the motorway as that road swung out wide then rejoining having saved maybe 500m to 1km. This was to be my chance of out foxing him and gaining enough time to give me a chance. I would still rejoin the motorway with 30km to go to the finish and have to push as hard as I could take.

Pulling out of the cafe I feigned extreme fatigue and that Carl was too strong for me to go at that pace. I settled in about 100-200m behind him and waited. I held this position for the next hour and a quarter as we ticked off the km to the critical junction.

Here it was. I closed up a near as I dare, hoping not to alert Carl until I was gone. Right turn and then hit it. Full gas for 10 minutes as I flew down the narrow roads, gently climbing up and descending, flat out through roundabouts. Here came the motorway slip road. I came onto it head down and hard on the pedals. I stole a glance over my shoulder. I had about 800m advantage over Carl with 30km to the finish. 2 1/2 days of riding had come down to an hour. Time to get into time trial mode. Houses flew past as I started to reflect on the journey I’d been on. 3am Sunday now seemed like a lifetime ago. The aches and pains of nearly 40 hours in the saddle eased away as I dared to dream of a 5th place finish.

I knew that Carl had issues with his Garmin and would have to stop to check his back up navigation. I’d been charging my Garmin ready and loaded up the route through Muscat. The traffic increased as I started weaving in and out at the roundabouts. Rush hour in Muscat was busy. I stole another glance over my shoulder. No sign of Carl. Up the last draggy climb on the motorway, pushing threshold for ten minutes, how I have no idea. Then a long fast descent with three lanes of traffic, hugging the hard shoulder to stay out of trouble. Heart rate rising as a broken down car forced me into the first lane of the motorway. Then before I knew it the harbour was in front of me. Just 2 more minutes and there was the finish line. Jumping over the central barrier and onto the other side of the road and down to the finish. Emotion draining out of me as I realised this great adventure was now over. 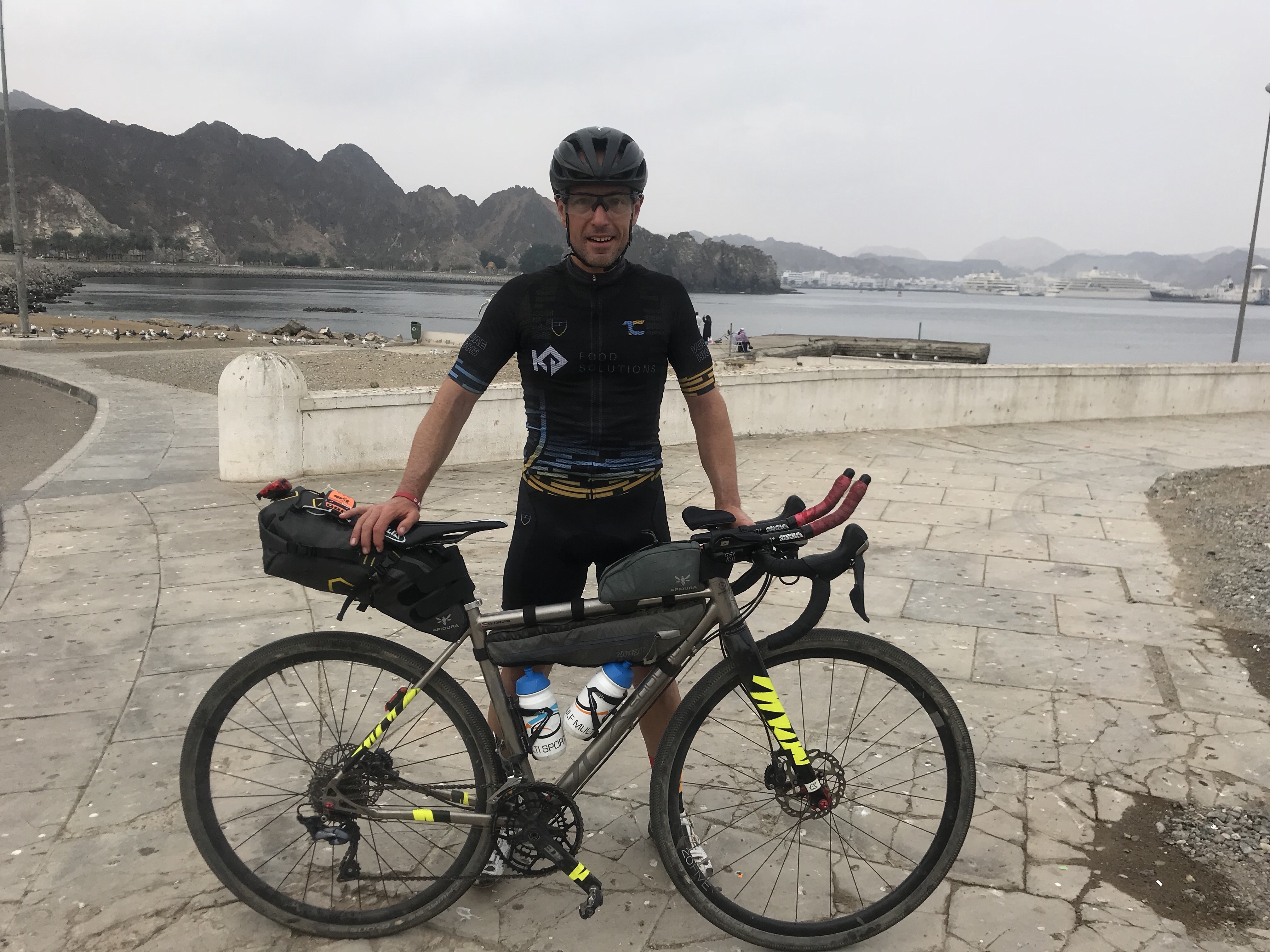 Carl came in 2 minutes later, shaking my hand and explaining how he could not stop laughing when I reappeared 800m in front of him. We talked of a race that exceeded all expectations. 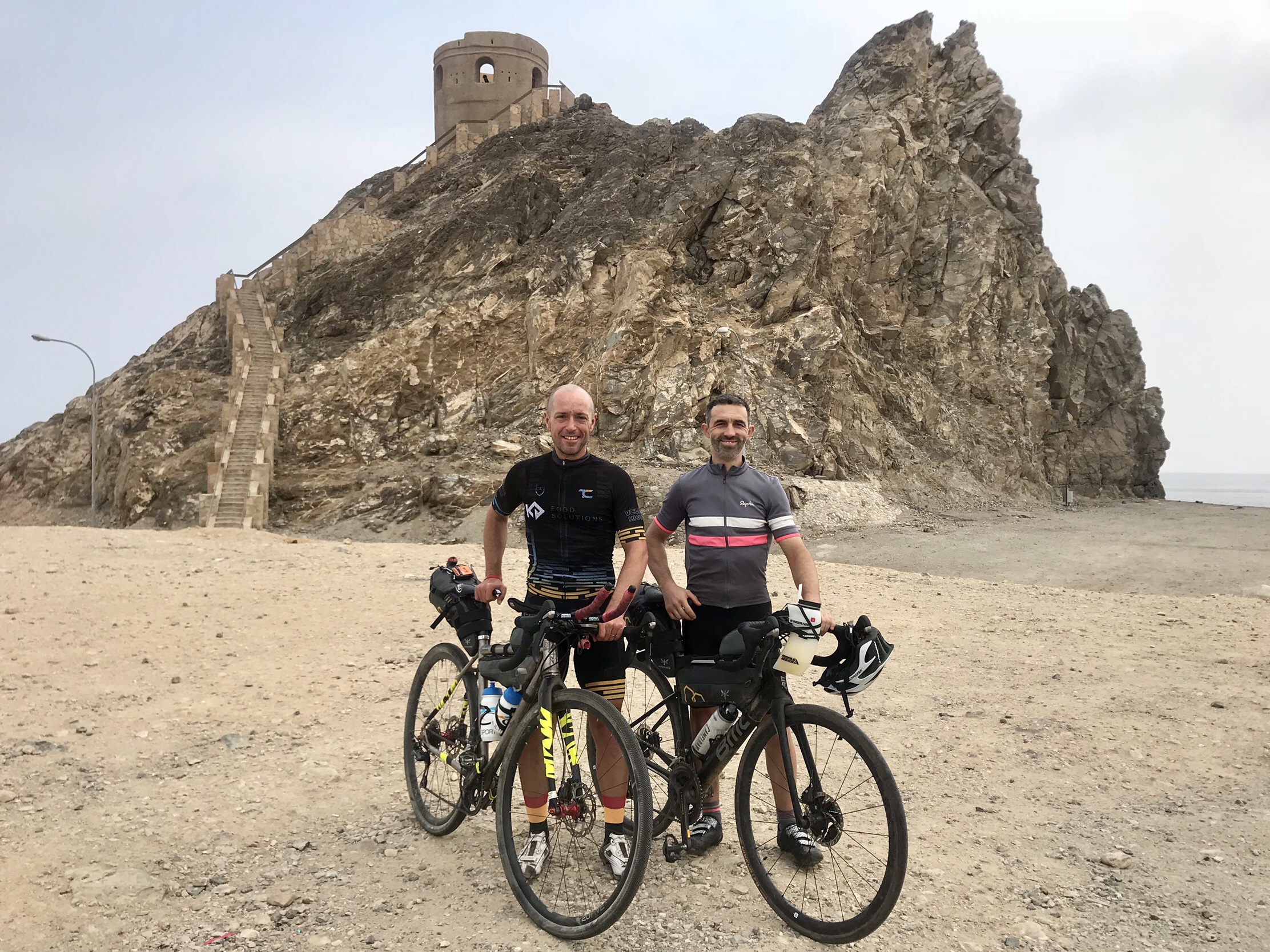 It has taken quite a while to process what went on in those 54 hours of racing. A lot of highs and lows. A realisation that I was much closer to the top then I thought. That finishing quicker does not equal riding faster. To witness some of these guys and girls race was incredible. To see one of the girls I coach cross the finish line in third place in the ladies category was possibly more emotional than my own finish.

Thoughts now turn to other races like this. BikingMan Corsica, Peru and Taiwan and then who knows.

I think I’ve caught the bug.